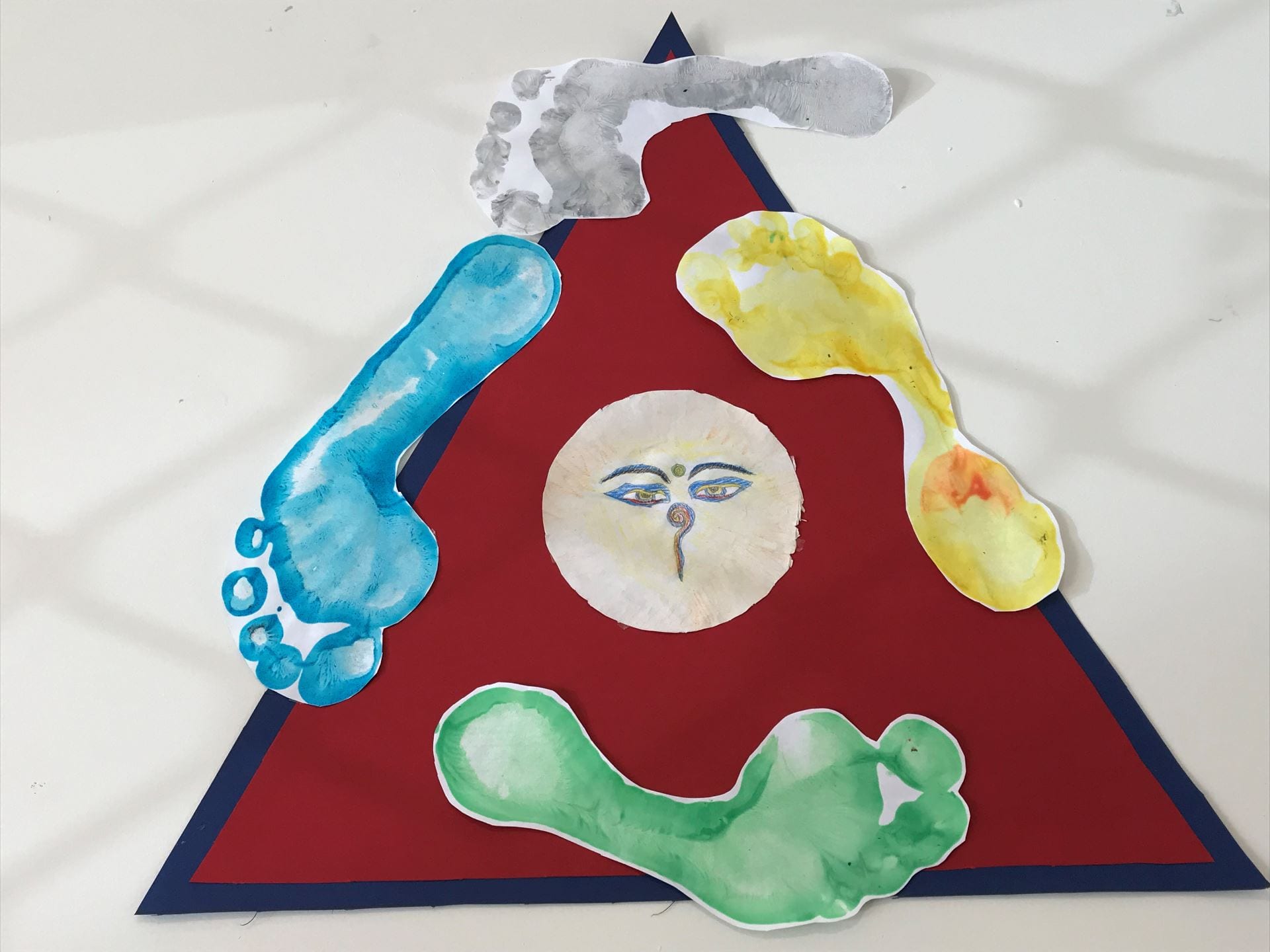 We had designed and created an electronic version of our emblem.  But we needed a version that we could hang on our wall, a motivational first step to all our adventure learnings that we want to put on display.  It now looks beautiful and on display, with all its symbolism, reminding us of our awesome adventure to come.  Our feet are now on the wall walking around a mountain, the goal we are going to help each other do together!  The eyes are in the centre, the windows to our inner selves and the individual journeys we will take as we venture out of our comfort zones.  Such an emblem  on display is so powerful to give us that sense of belonging to a team working towards an adventure together.

Creating this paper version though, posed a math problem!

We had to create a red triangle with a blue border, just like on the Nepali flag. I gave the kids the task of doing this, but told them that I didn’t want them to just cut out dodgy triangles, but that we needed to make a perfect triangle with the border relative and consistent. How are we going to do that????

These piks tell of some of the thought processes and research involved : 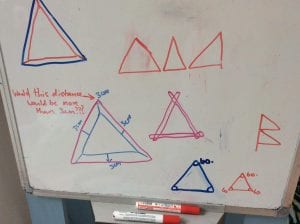 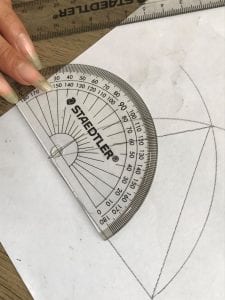 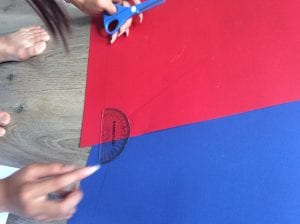 Their ideas included measuring a cm border around an initial triangle, from the middle and each point…but then realised that 1 cm from a point of the triangle would not meet the line of 1cm from the middle of the side, making a wonky second triangle.  They thought about just cutting strips to place around the edges of the first triangle, but couldn’t work out exactly how to do that precisely.

They do a Maths Online program, that just shows them how to do math concepts, then they do a few online worksheet style questions, which they normally get most ‘right’.  Similar to what they would do in a classroom, great to cover the curriculum…but applying what they’ve learned about triangles and angles to this actual task was not so obvious to them.

They decided to try and draw the first triangle, and then work out how to do the border or a bigger triangle later. Even this posed a problem, they had agreed on the type of triangle they wanted to draw, an equilateral one, they knew this one had equal sides, but how to draw a perfect one?  It took a lot of discussion, and even a few prompts from me wondering if there was any other way, other than the length of the sides, that we could measure or determine a triangle…’Corners!!’ they shouted…’How do we measure these corners???’ I asked…

Even though they seem to learn the facts, even though we have done other practical tasks involving angles, like making a photo frame, measuring body angles whilst doing certain sports…it took discussing about these connections for them to work out that knowing the angles of the triangle might help us draw a perfect one.  As soon as this had clicked, they went to researching, asking google how to draw a perfect equilateral triangle.  They found a compass method, then practiced on plain paper, but then realised that the compass method was not going to work for a big triangle, their compass was too small.  So they found out they could use their protractor to measure the angles, then draw the two remaining sides, regardless of the size of triangle they wanted to draw. Drawing the second bigger one was then the same process, just a 2cm longer base!

We each made a footprint with paint, each one coloured to symbolise the elements, this was our foot ‘signature’ pledge to the team!  Then traced the Buddha Eyes in a round sun to place in the middle. 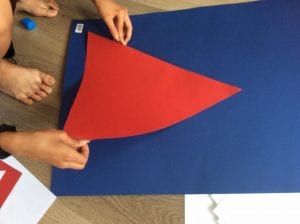 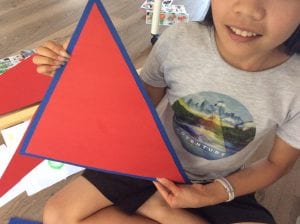 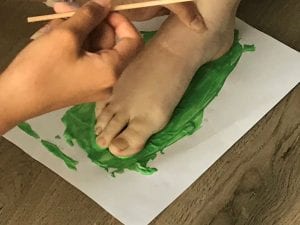 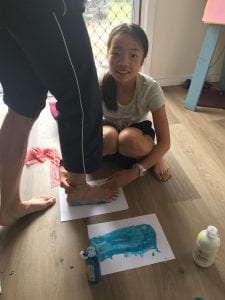 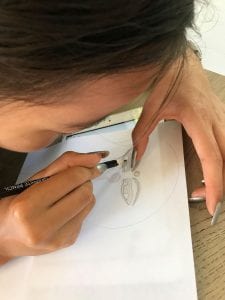 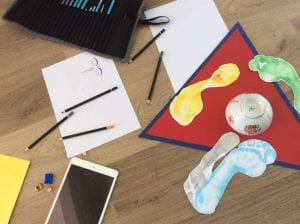 It was a long process to get there, but learning that will stick more than just a few worksheet questions about angles.  Plus they had a perfect red triangle with a perfect bigger blue triangle to place it on, that they were really happy with as our symbolic mountain to start off our wall display!

For us this activity was more for our sense of wellbeing and belonging to a team.  It has many learning areas covered, but this post has focused on Math outcomes. Math outcomes can be ticked, but often kids don’t really understand why they are learning them.  If we were to link this learning to the curriculum, we could use this one in the YR6 ‘Using units of measurement’ section:

Or this one in the ‘Geometric reasoning’ section of the Yr 5 curriculum:

But at the end of the day, we wanted to draw a triangle because we wanted to put our emblem on the wall.  We learned how to. We learned that knowing about angles was useful for this task, will probably forget this, but know we will be able to find out what we need to know to solve a problem next time. The main learning was working out how to find the information needed for the task. It’s just reassurance for some that it’s linked to the curriculum 🙂