This blog post follows on from Tiger Leaping Gorge Hike : starting in Lijiang

After a few days of exploring the Jade Dragon Mountain towns, we were ready to head off to Qiaotou (桥头 qiáo tóu), where we would start our hike to the gorge. 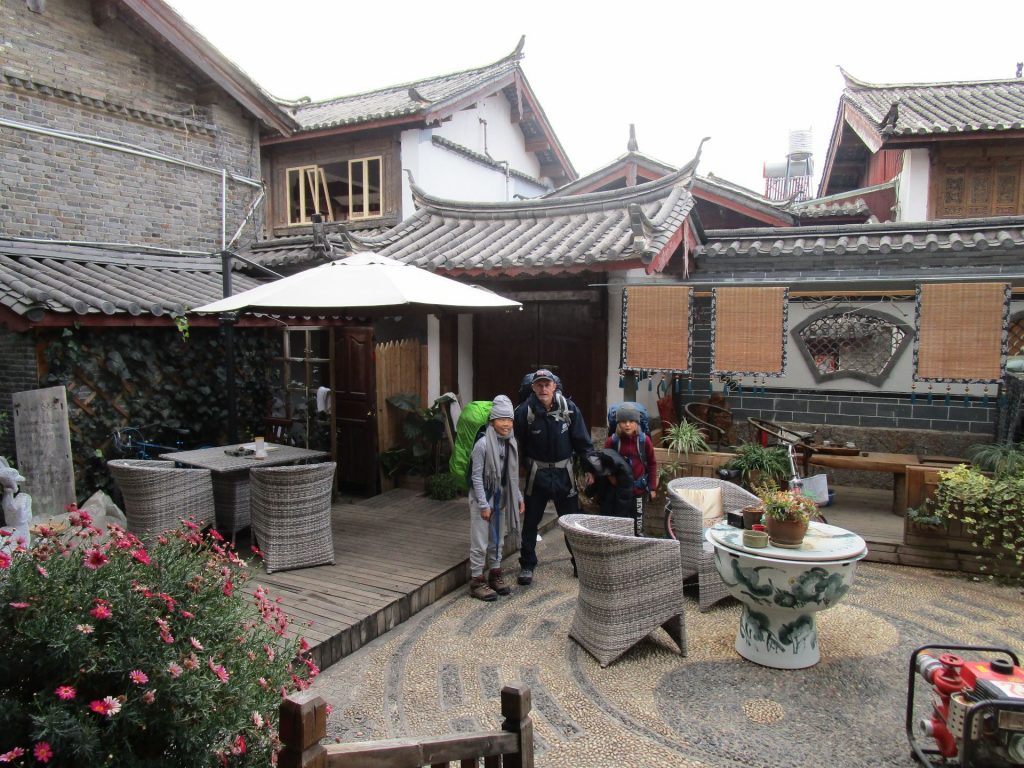 Leaving our Lijiang Guesthouse to the bus station 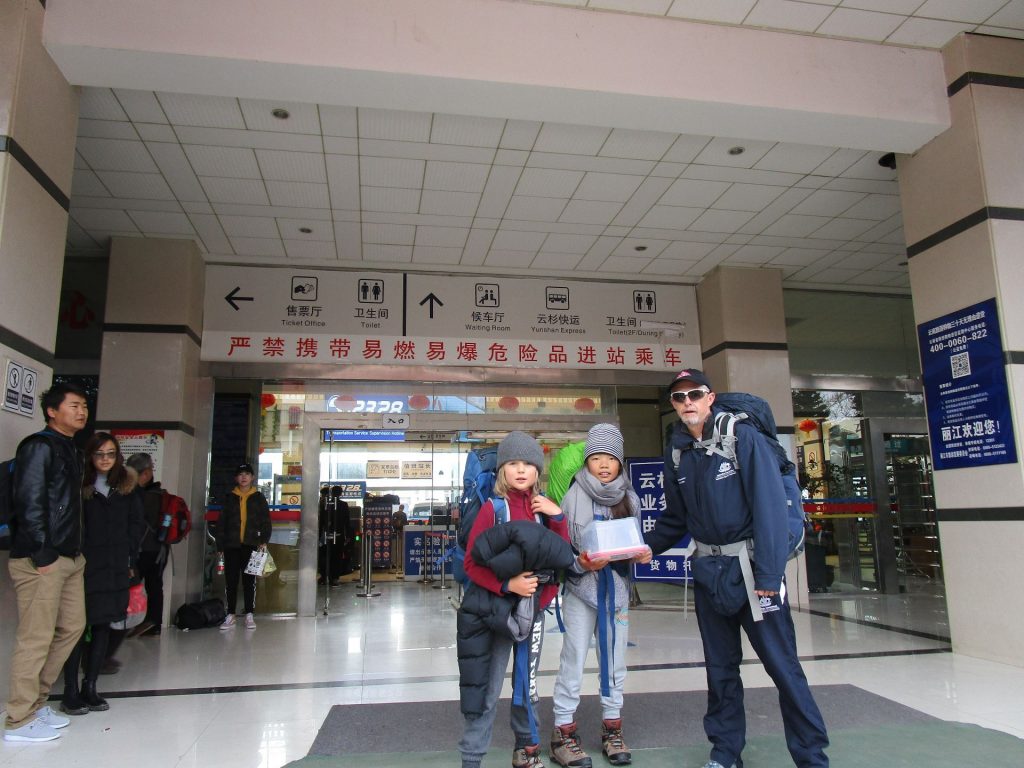 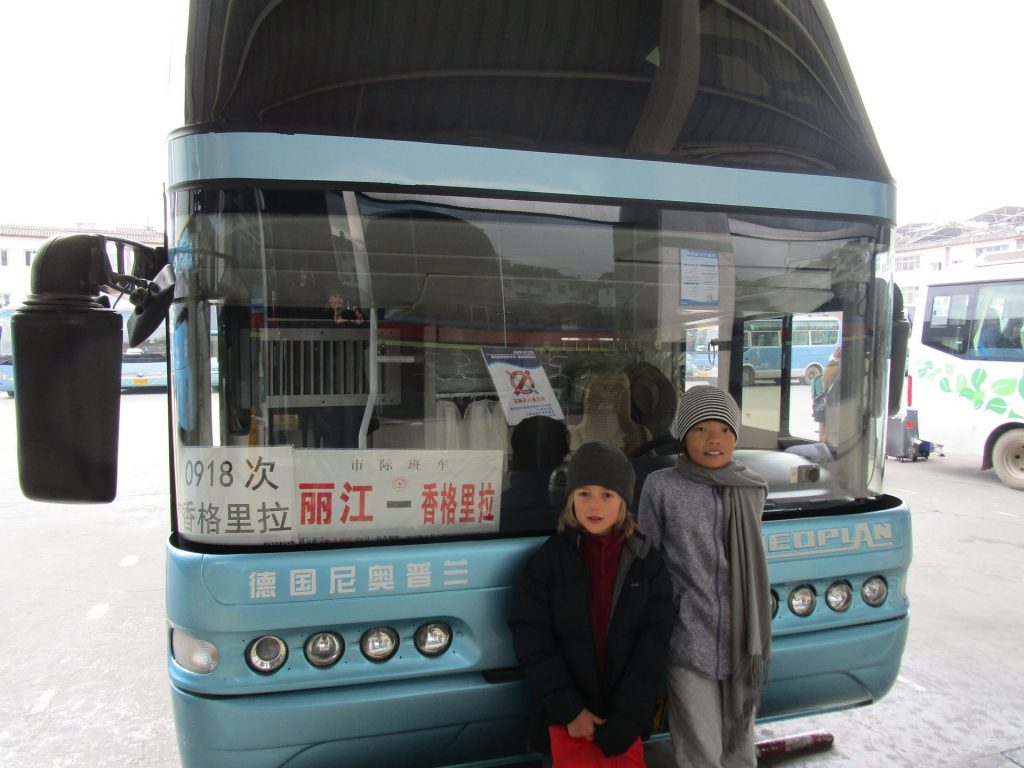 The bus to Shangri La, we will get off the bus at Qiaotou though.

It’s not only train stations with added security, getting on a bus requires the same passport scrutiny, baggage screening and body scan. Our bus was bound for Shangri-la (香格里拉 Xiānggélǐlā) also known as Zhongdian (中甸 Zhōngdiàn). Lee and I visited this town 20 years ago and nearly FROZE. It is the closest you can get to Tibet without having to go through the paperwork to get there! This time, being the coldest month of the year we gave it a miss and just focused on our hike, we got off the bus at the town before, called Qiaotou (桥头 Qiáotóu). We walked to Jane’s Guesthouse 峡谷行客栈 (xiá gǔ xíng kè zhàn) who let us leave the kids’ backpacks there for 5￥ per pack for however long we were hiking. We knew parts of the trail were a little hairy, with really steep drops…and we didn’t want the kids to have packs that might ‘overthrow their balance’! So Lee and I carried all the stuff we needed for this hike. 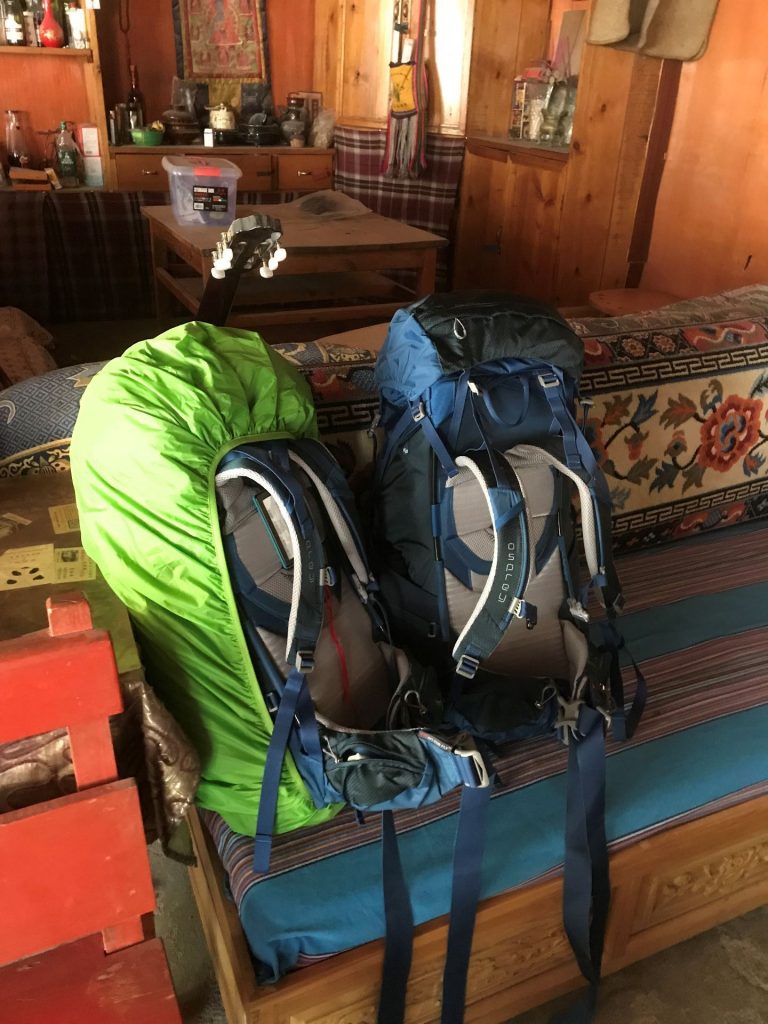 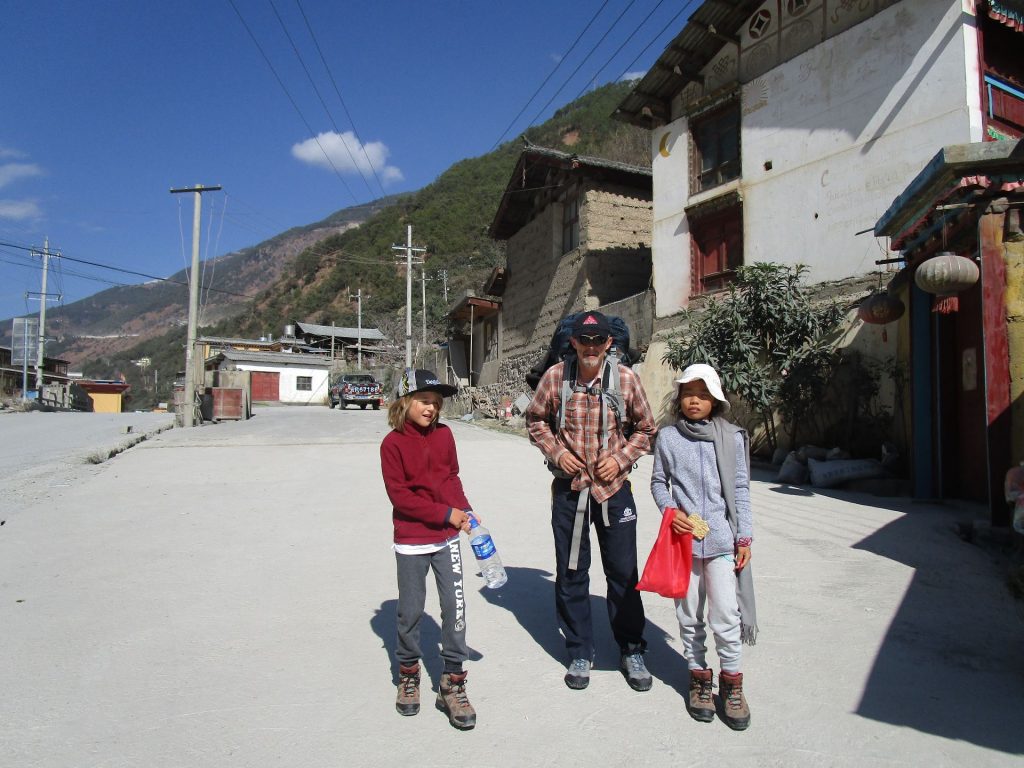 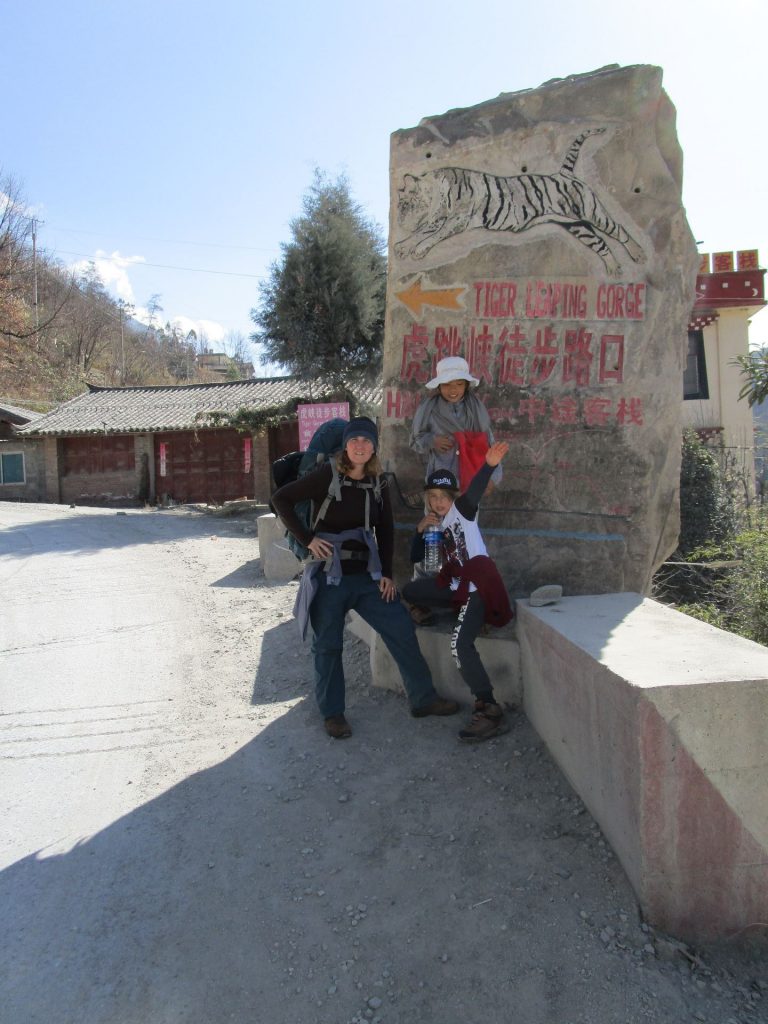 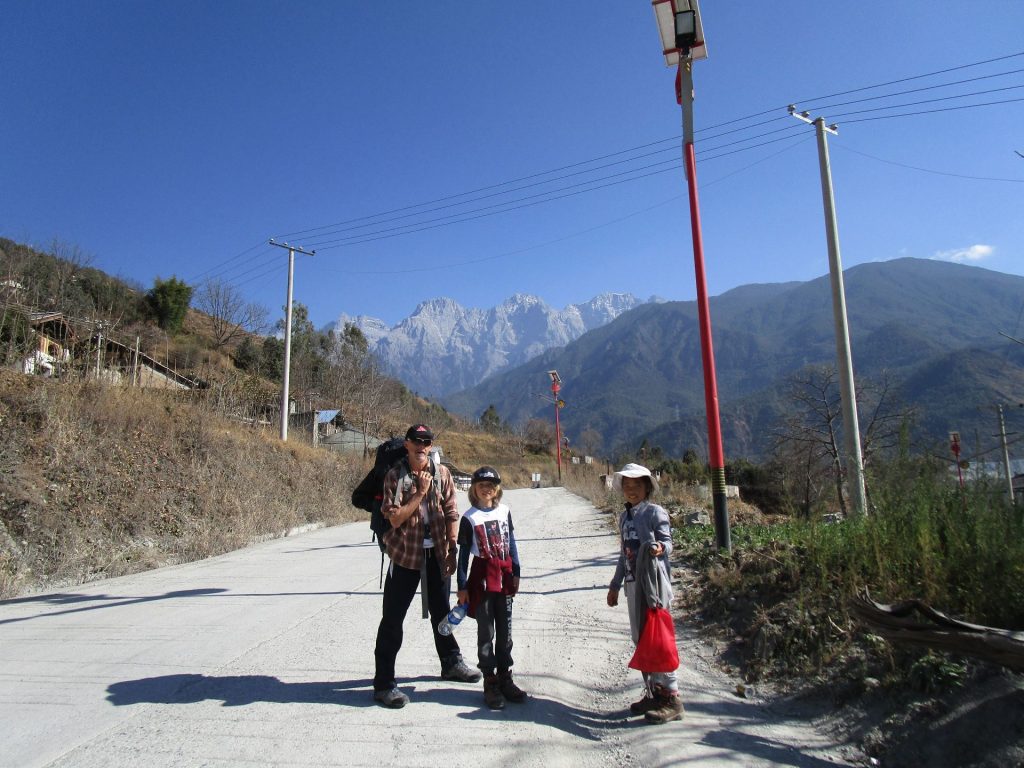 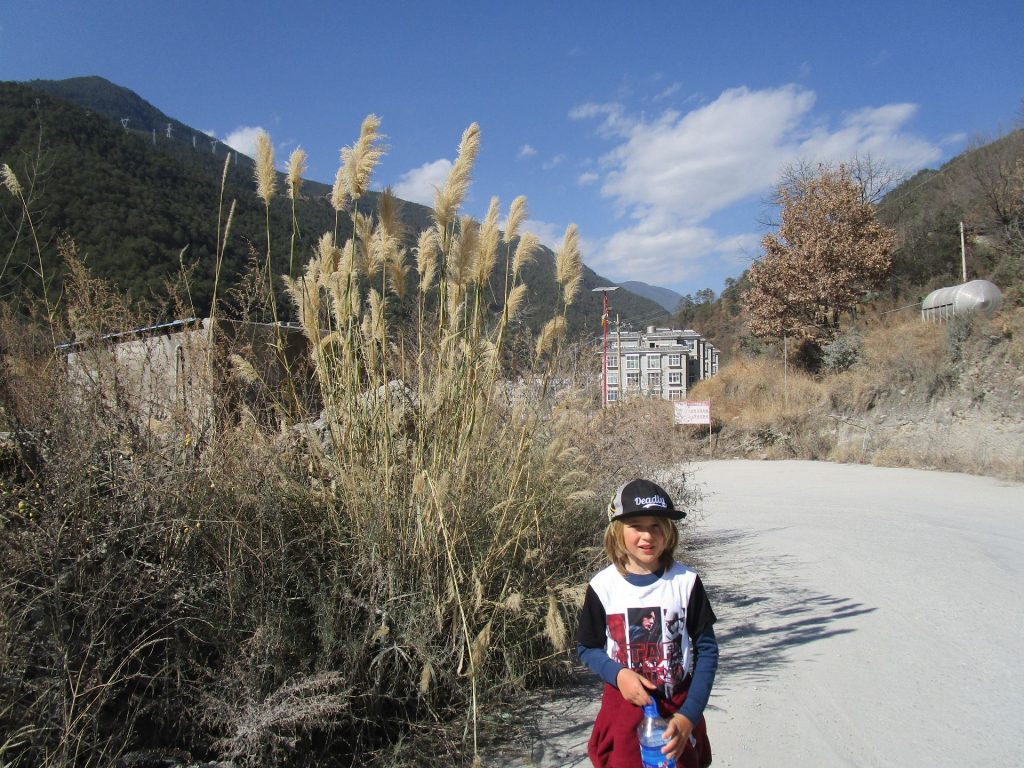 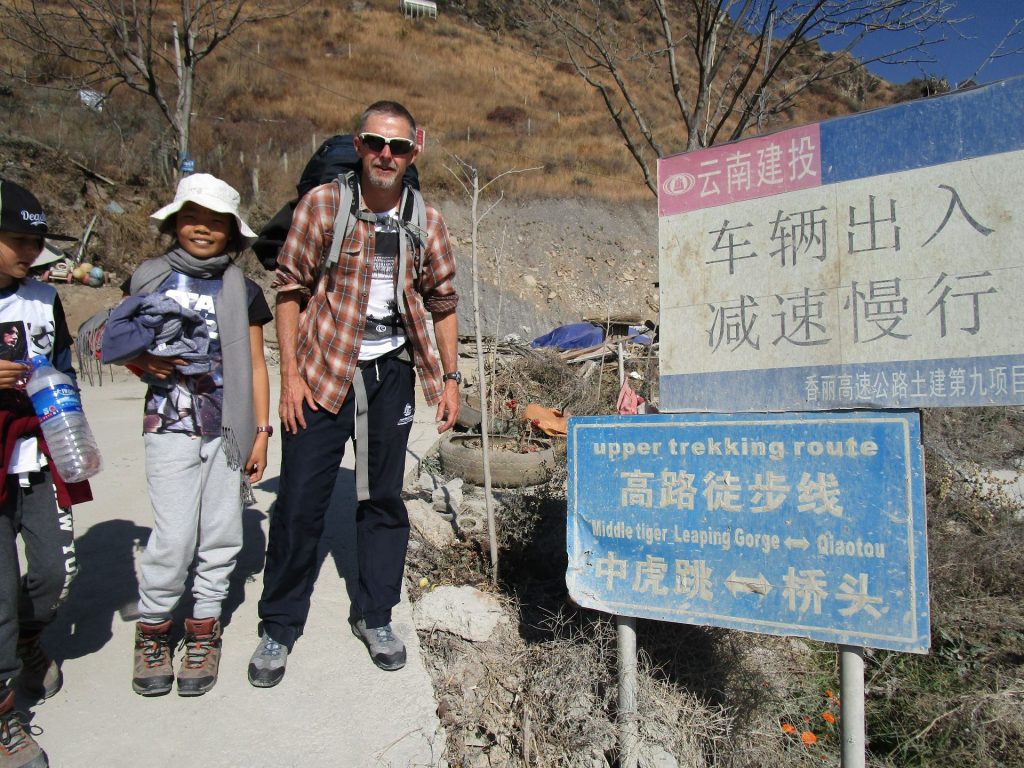 It was a 45 minute walk or so till we actually got to the start of the track. It was the ‘high trail’ we wanted to make sure that we were on (the low road that has been built into the gorge for ‘lazy tourists’ is a bit boring and dusty). The high trail is the trail that has been used by the villagers and goat herders for many years. We kept our eyes open for the blue signs like the one in the pik above, to make sure that we were on the right trail. It’s winter, but in Yunnan province the winter days are blue skies and a harsh sun. So our packs were pretty much full with the layers of clothes and puffy jackets to keep us warm at night 🙂

Lucas was pretty happy to see the 芦 (lú) reed flower on the way. This character actually forms part of his Chinese name 芦卡思 Lúkǎsī. 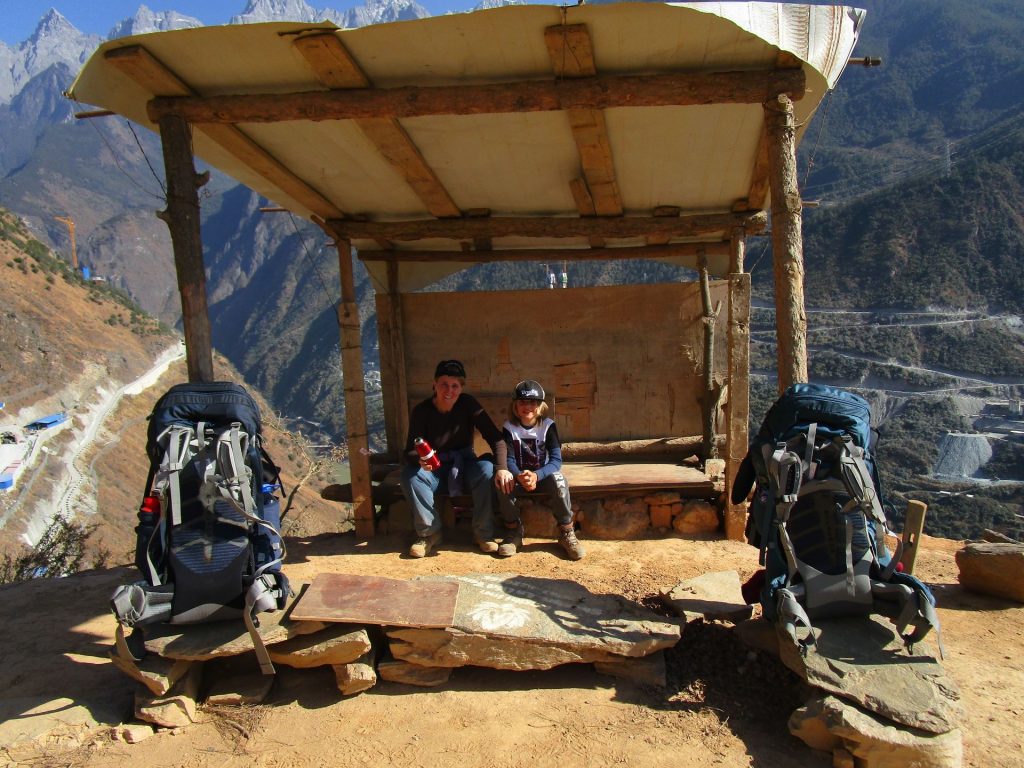 Lots of little rest stops like this along the climb 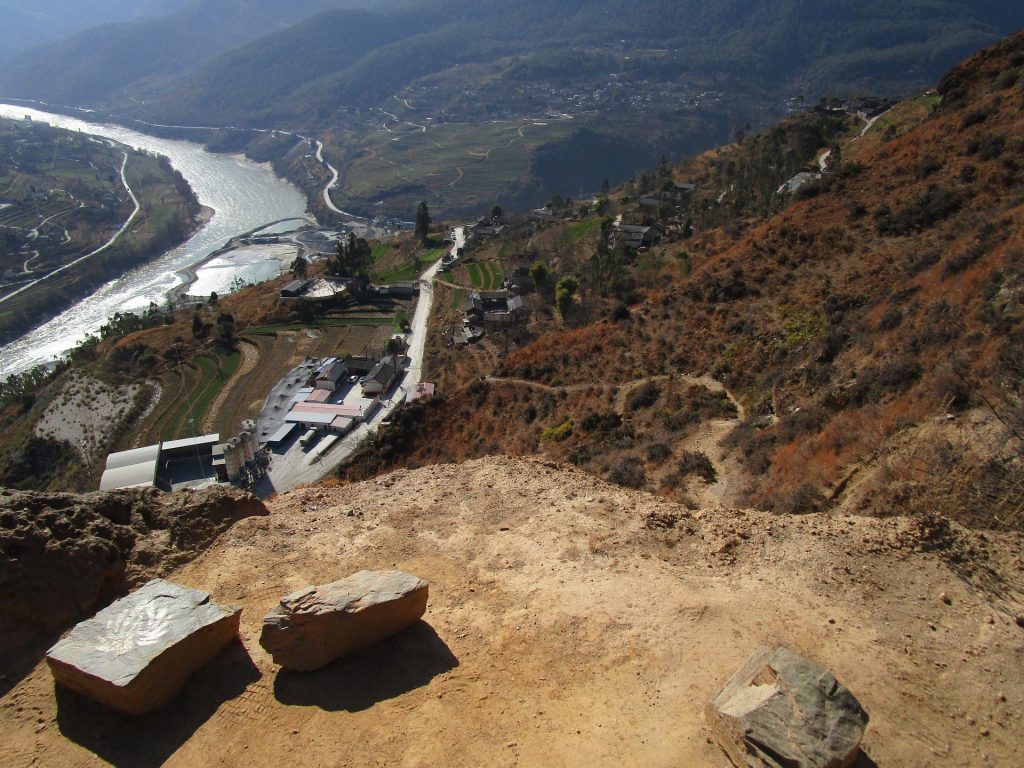 After our first half hour climb, already pretty high up and we can see the Jinsha river that forges the gorge 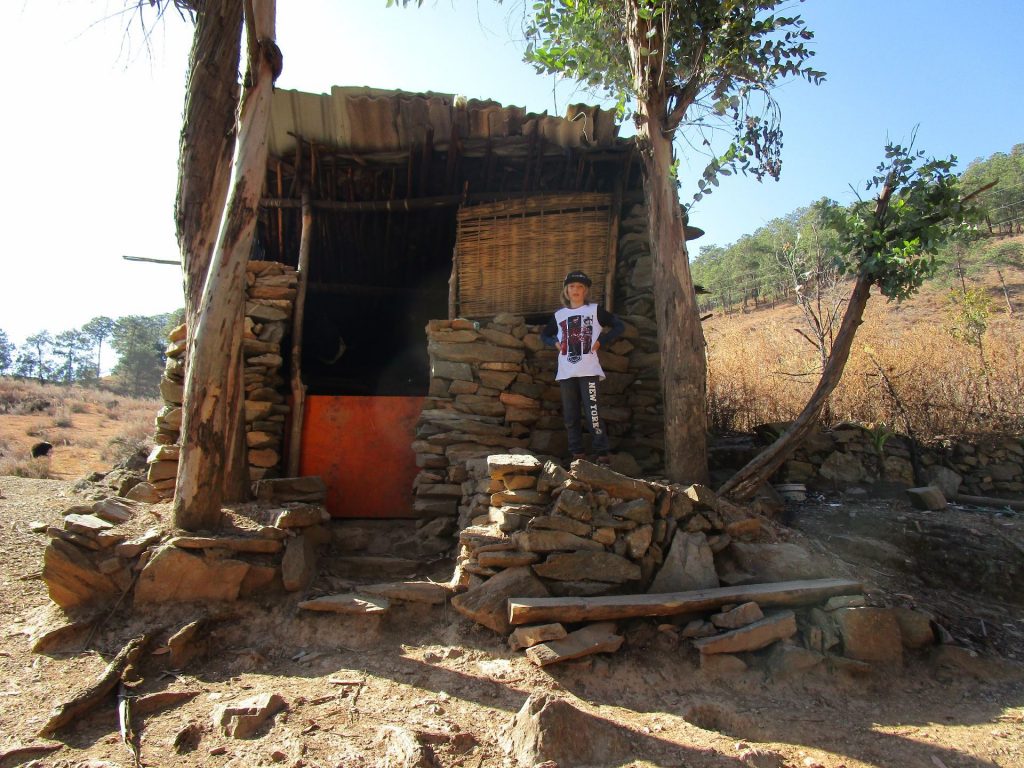 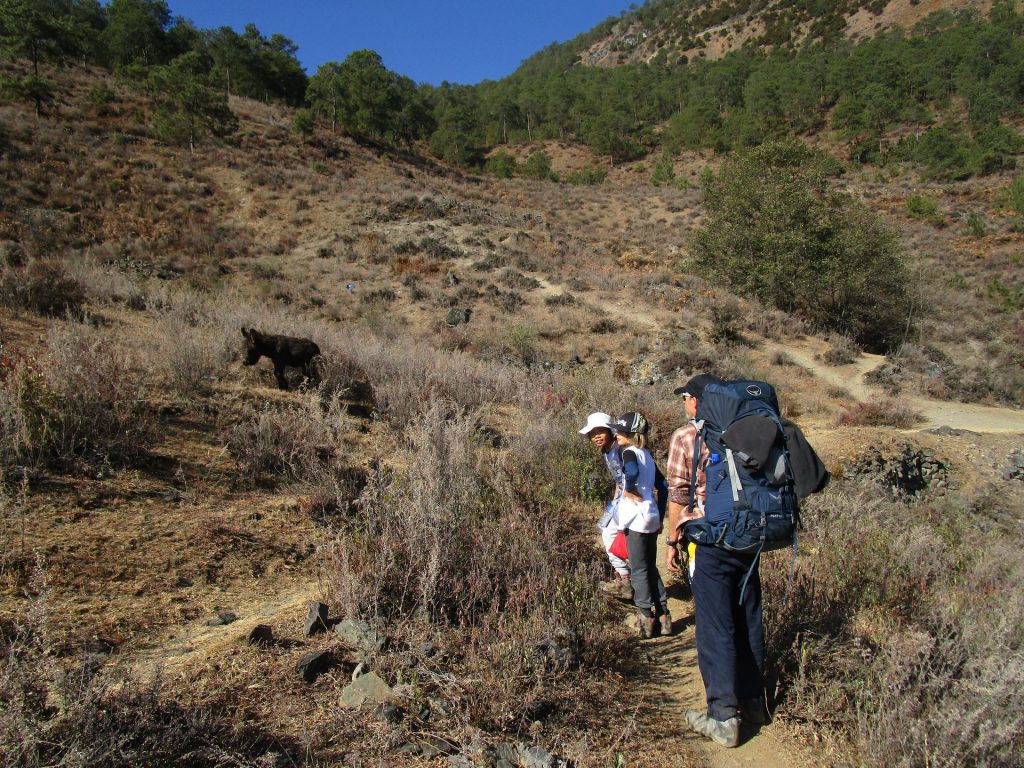 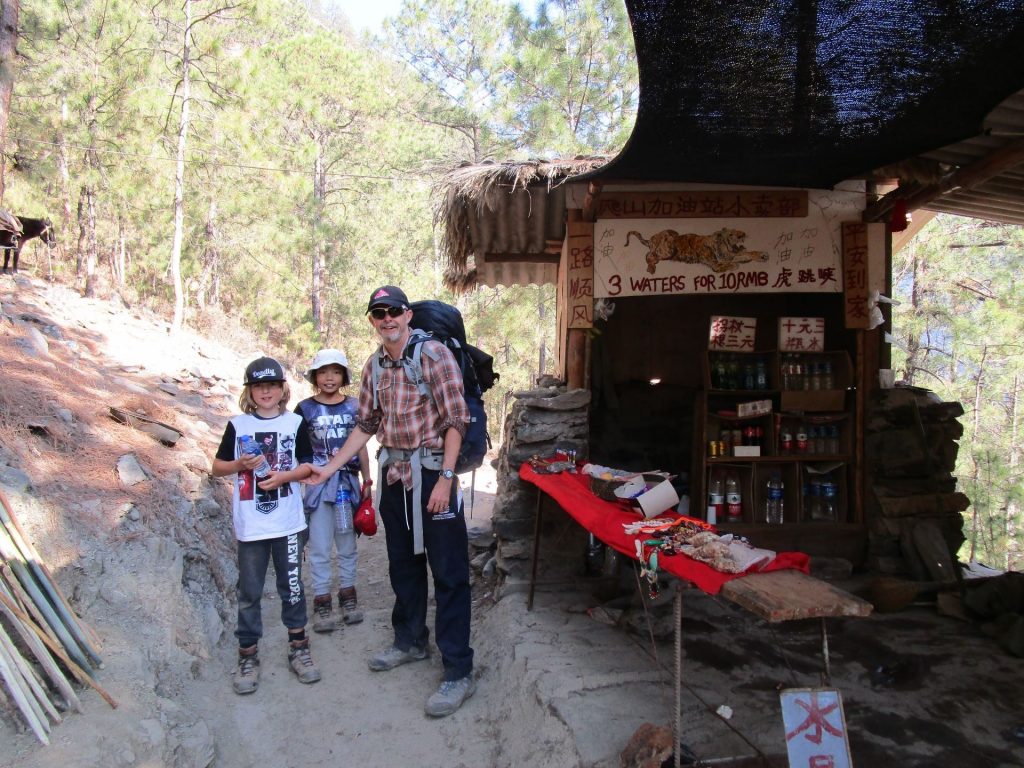 A cool little shop a local had set up for hikers…water, snickers, river rocks and adult herbs 🙂 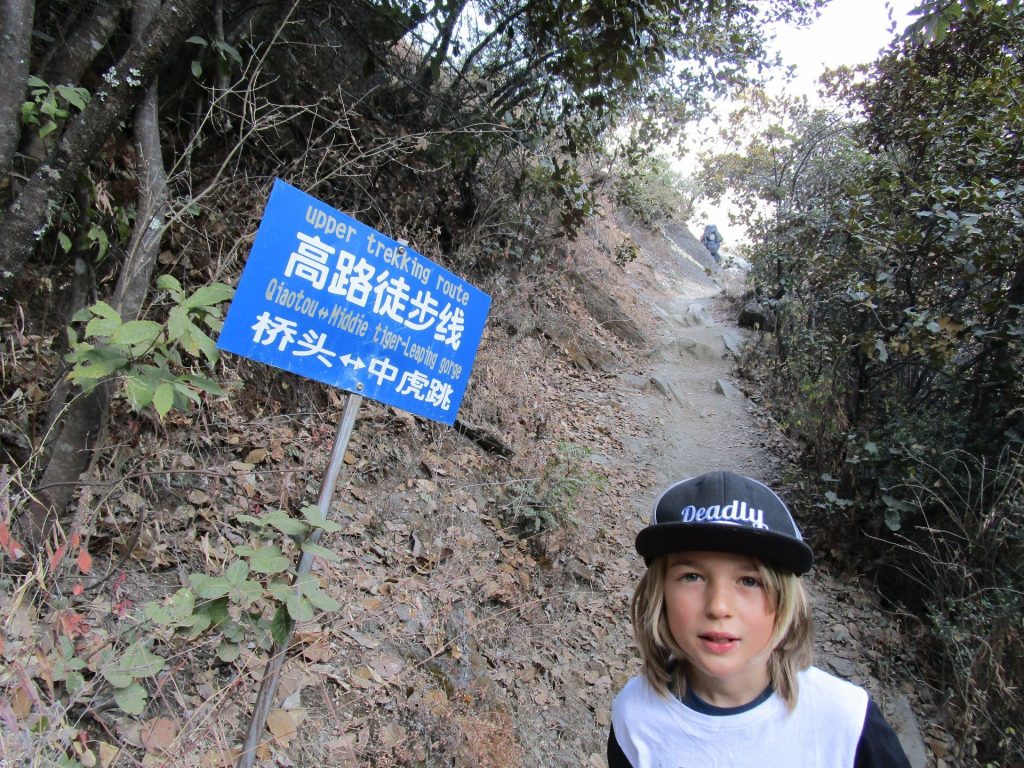 Yes we are on the right track still 🙂 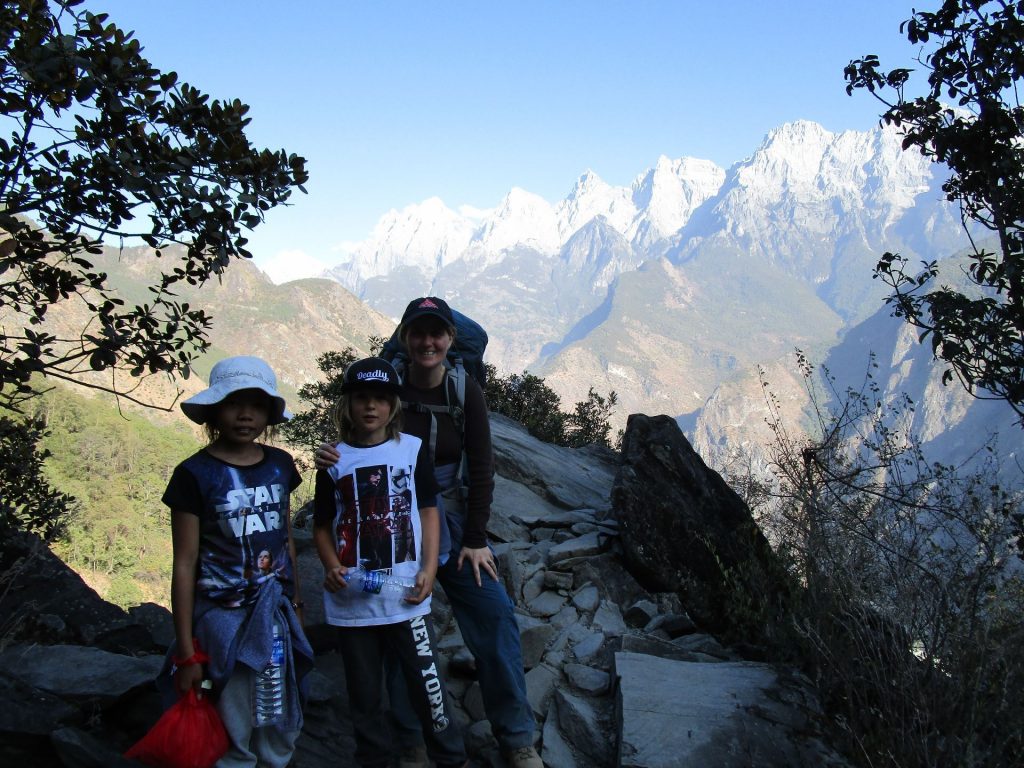 Starting to get pretty high now 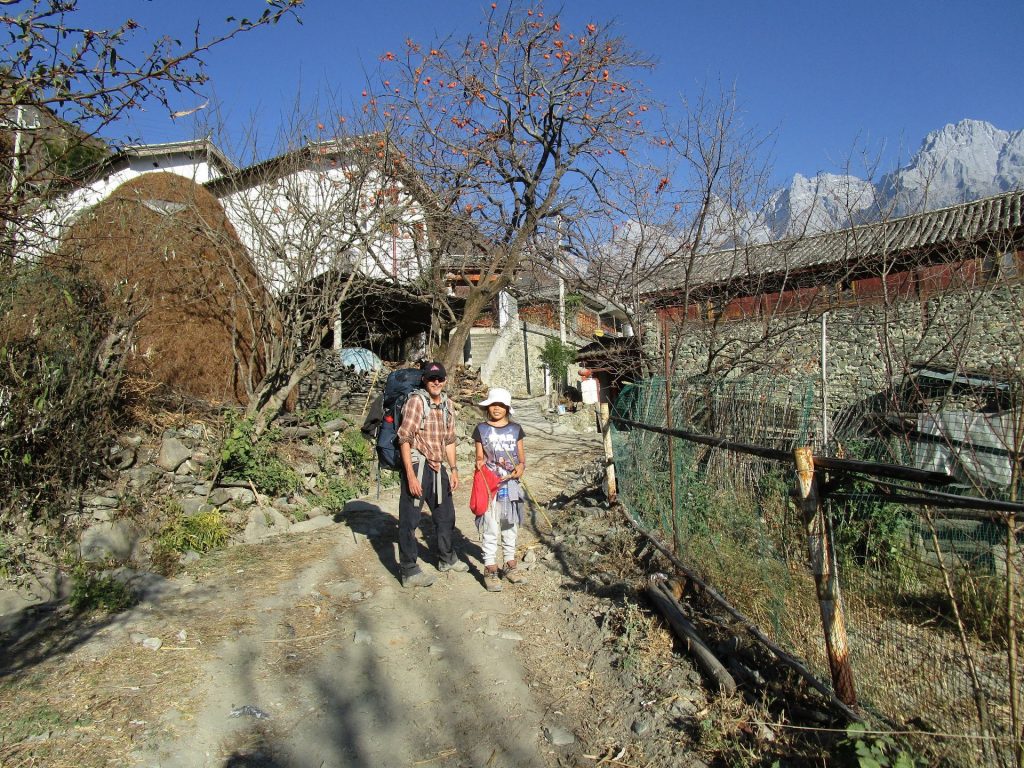 We were really happy to find our first guesthouse of the hike, The Naxi Family Guesthouse (纳西雅阁客栈 nàxī yǎgé kèzhàn) in Nuoyu village (诺余村 Nuòyú cūn). The hosts were very welcoming and friendly, and the food was yummy with an amazing view of the gorge! 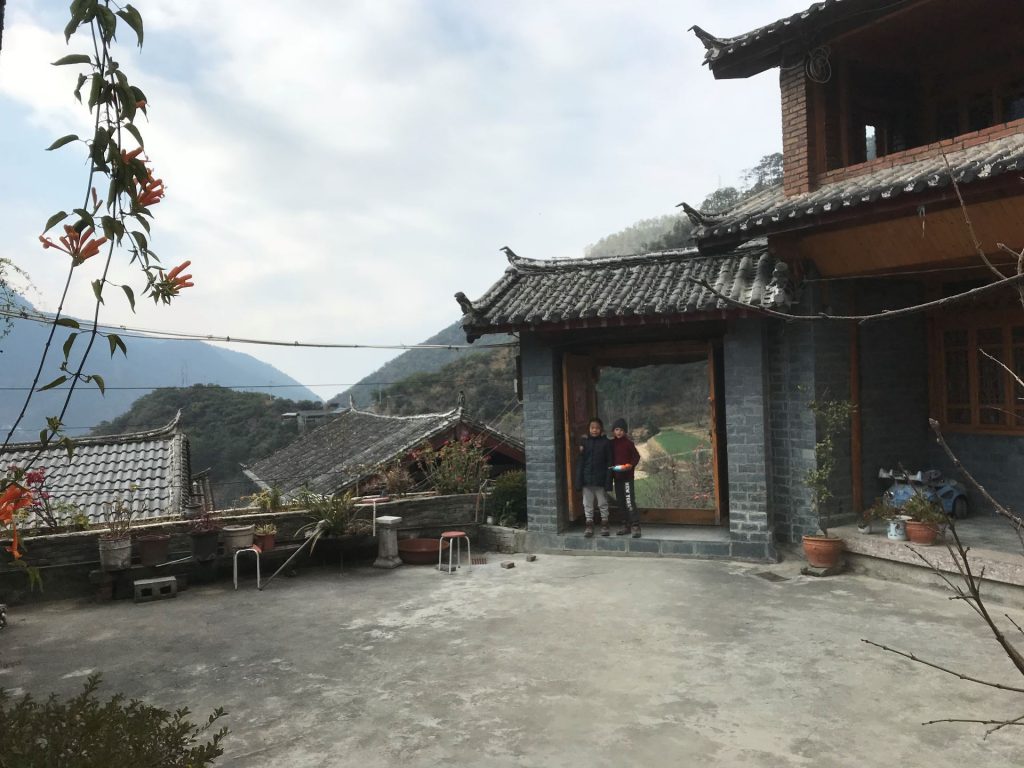 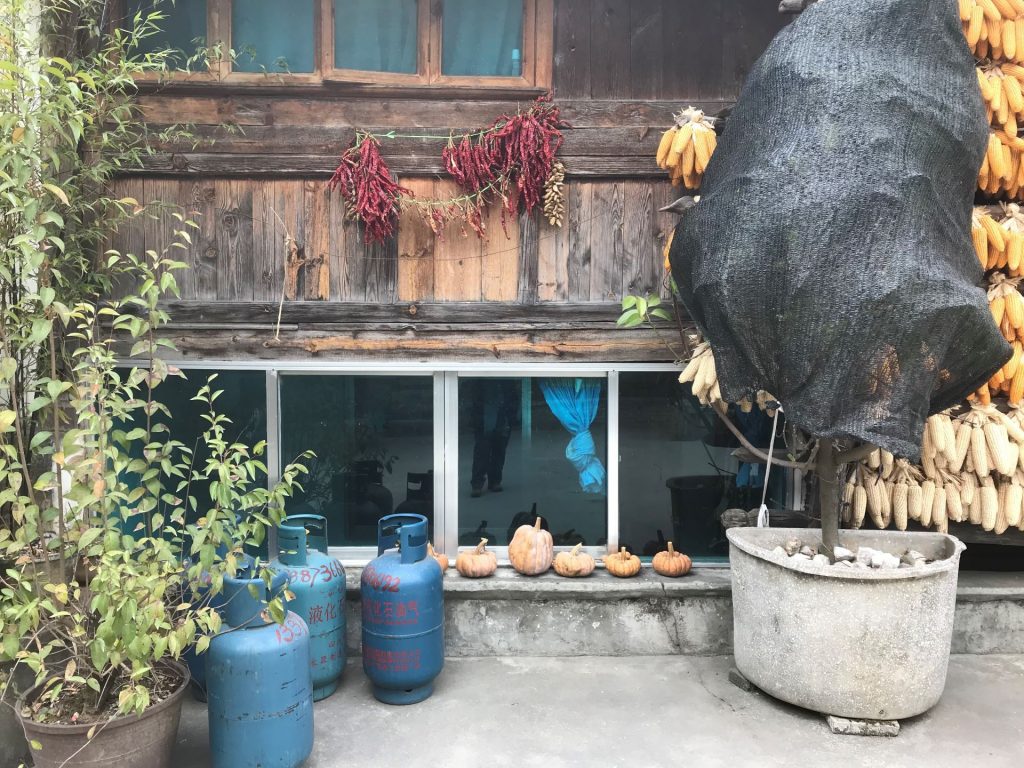 Chiilis and Pumpkins drying at the Naxi Family Guesthouse 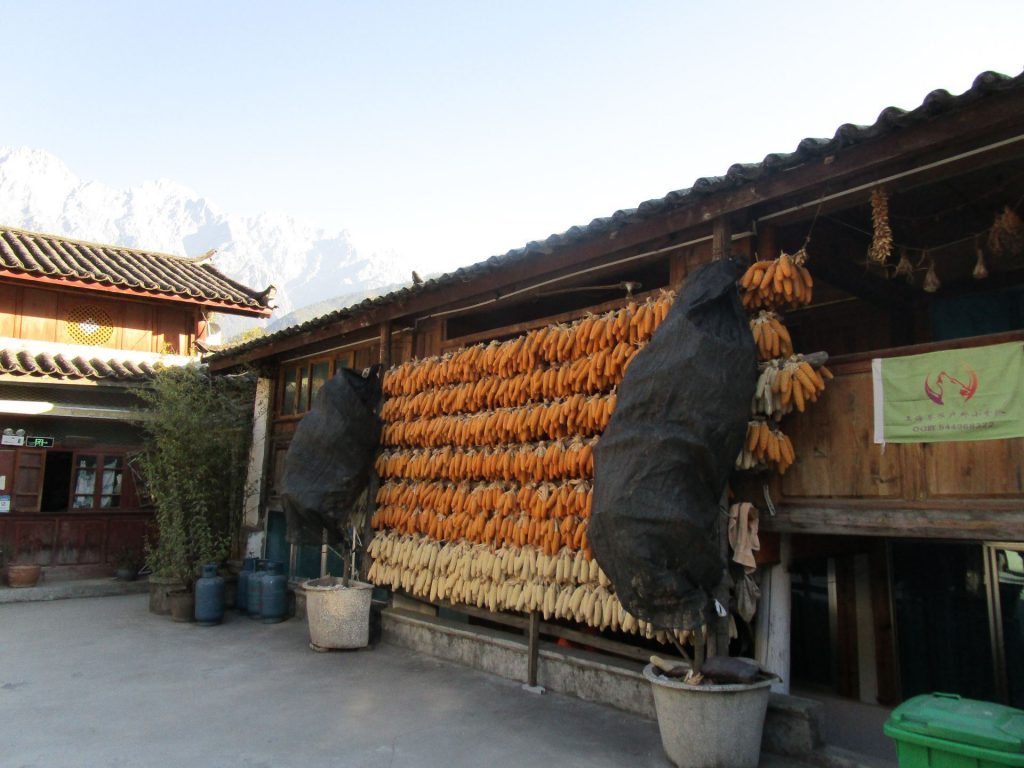 The food on the menu at the Naxi Family Guesthouse is all grown around the village and on the terraced fields around. 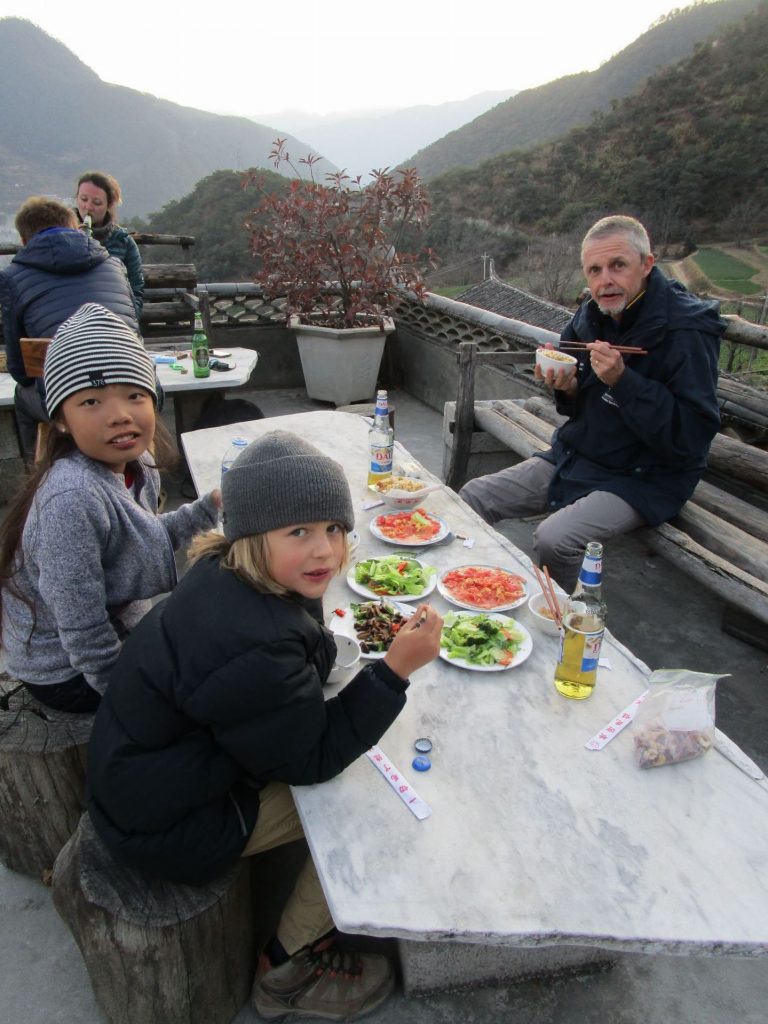 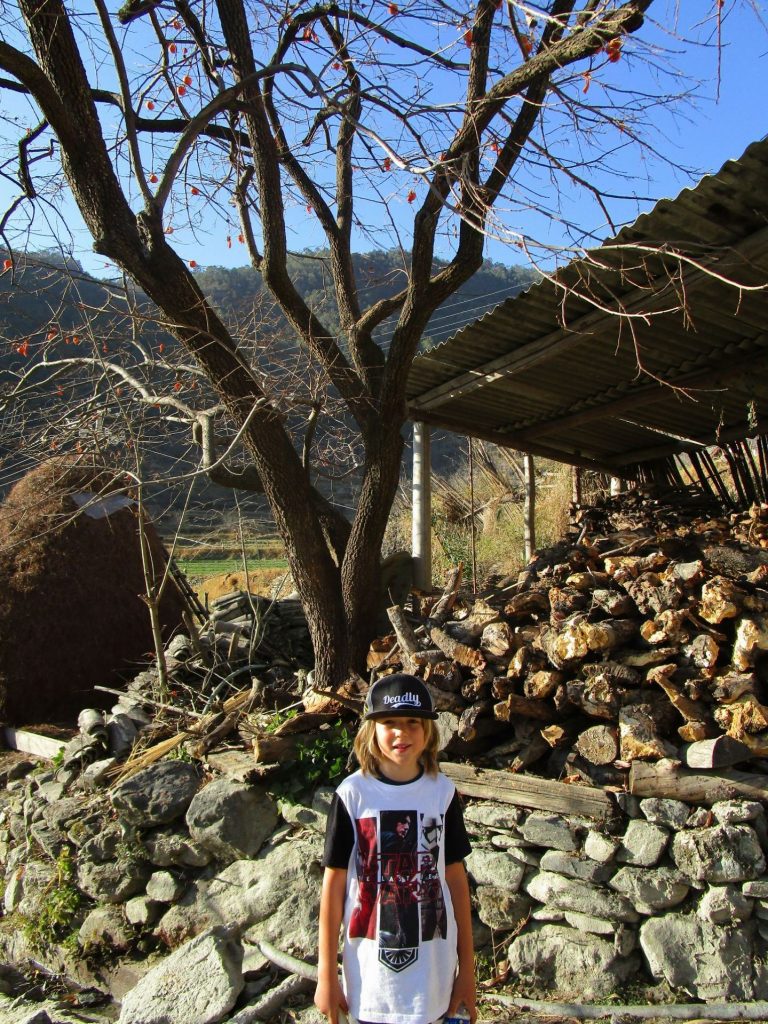 So many fruit trees around the courtyard 🙂

The mountain views from the guesthouse just seemed to make the food yummier and the sense of acheievment from the days hard climb more rewarding 🙂 As the sun went down the colours of the mountains changed. 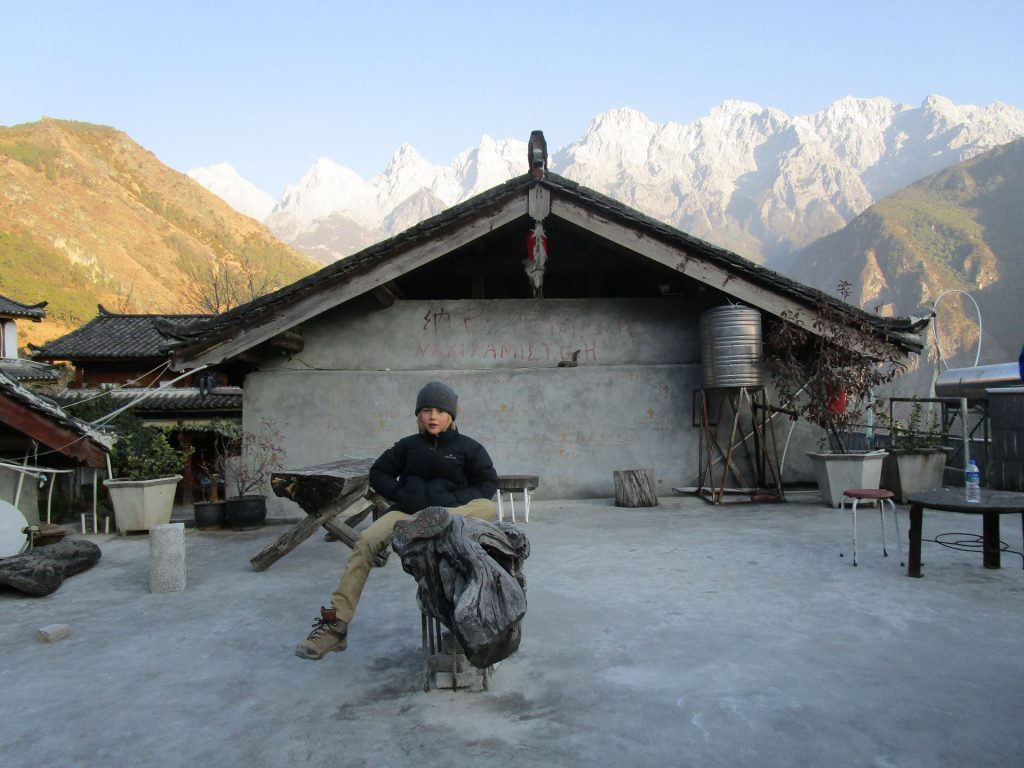 The sun starting to go… 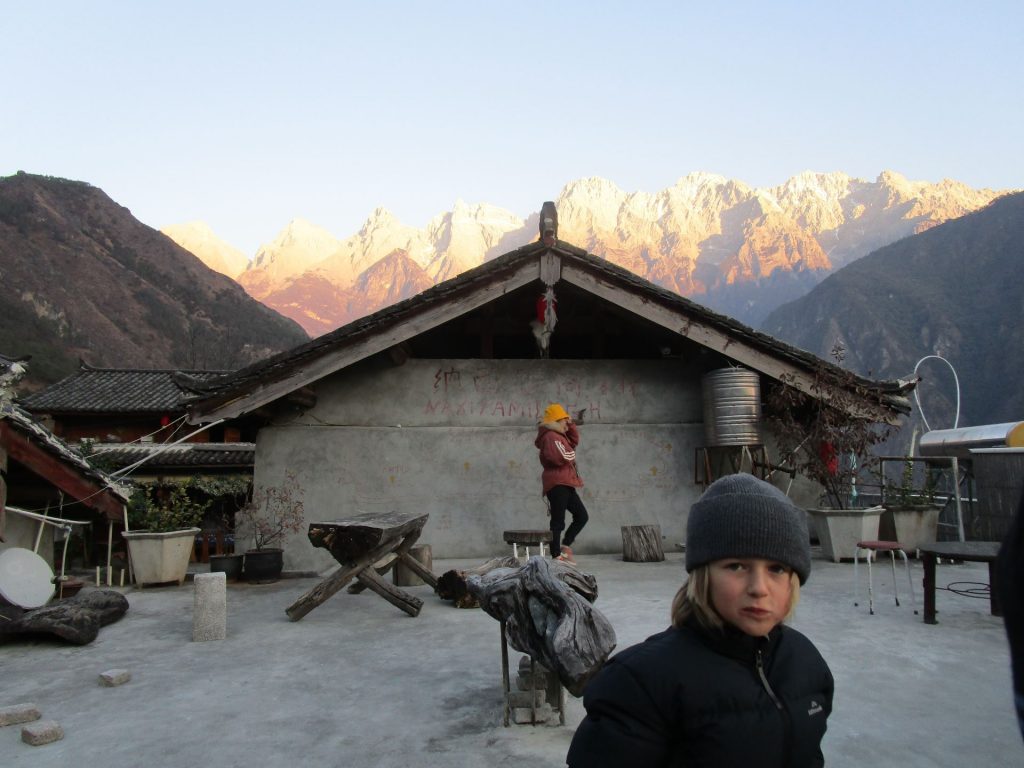 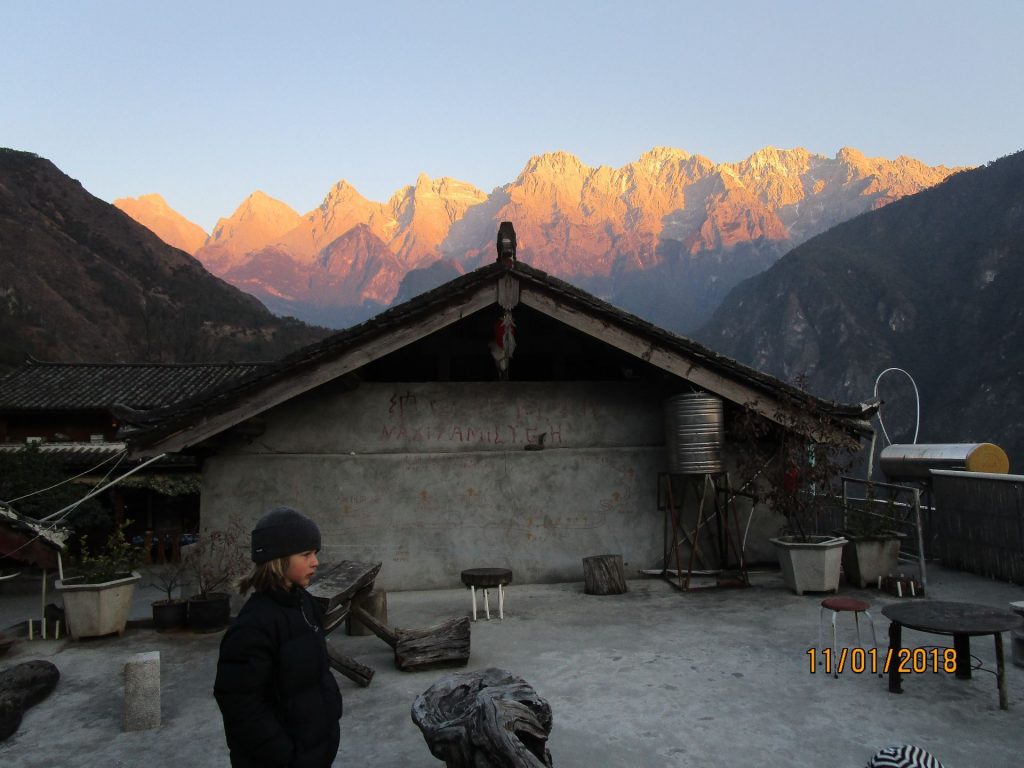 Time for sleep…to read about day 2 of the hike click the link. Or follow in our family’s Mandarin learning journey on our Facebook page Mandarin Motion