Some reflections on a piece of work I was handed today…Letting kids learn a language the way they want is so powerful, and letting them learn it within a world that teachers and adults are not so familiar with means that they can teach you a few things…even more powerful! (Parents note this level of independent Chinese does not come without years of exploring songs and stories in Mandarin…which is why I recommend kids attending a ‘song and story time’ kind of session in your area in the early / primary years!) 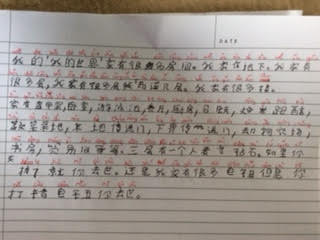 Mandarin teachers…if you cannot see the text clearly on this image, you can download a pdf here Minecraft text Mandarin.

For those who are not ‘with it’ when it comes to Minecraft (like I am so ‘with it’ now…not), they will know that their kids spend an awful lot of their free time watching Minecraft videos on YouTube…videos other users have made to show their worlds, and it’s one way that our kids ‘learn’.  My 10 yr old daughter watches YouTube videos about Minecraft, and has started watching them now in Chinese…she watched lots and eventually found a channel with videos made by a female…with content she found interesting, and the commentary was also to her liking, I think she liked the soft clear female voice, and also liked her mature style! She said to me while she was watching them ‘Mum, I can’t understand everything she says, but I can pick up a few words, and just listening is good practice right?’ (I personally think she is more switched on than I think…she knows I will let her spend more time watching these videos if I think she is learning Chinese :-).  One of the videos was titled 一百死了, or ‘100 ways to die’, which is a common thing to watch apparently! In Minecraft you just disappear when you die, and you can ‘re spawn’ so it is just a bit of fun! My kids love to find ways to set up ‘traps’ in their world and find it hilarious when their friends fall for them and ‘die’.

When kids are so interested in finding out information like this, they are in the moment, deeply engaged.  After watching such videos, my daughter decided to write about such a house that she was going to create in Minecraft, and that she was going to write about it in Chinese.  She happily searched Minecraft wiki sites in Mandarin, to find the appropriate vocabulary to write about her new Minecraft creation.  She wrote a list of vocab that she thought that she would need, in English, Chinese character and pinyin.  She then started her writing.  She has written about houses and rooms before in Chinese… it’s all part of a typical text book language learning.  But now she had set herself a task with so much individual meaning to her.  She had been given the time to take what she had learned, into a deeper level and write about a house that excited and interested her, and that she was actually going to create when she gets her Minecraft time.

Apart from this piece of writing being pretty awesome, the skills behind the scenes required to produce this text are what I would describe as mind blowing! It is a common mistake, especially in young learners to look up words in a dictionary, and choose the first word they see, thinking that every word in a language can just be literally translated, or not understand the right contextual choice, or fit words into a sentence in the wrong order because that’s how it’s written in their first language.  To be able to read wikis in Mandarin, choose the right words, look up the words in dictionaries not quite sure of, transfer them into sentence patterns that you are slowly becoming familiar with is a skill some third year university students of Mandarin would grapple with!

My little girl never writes pinyin above her work, she has learned Mandarin without the use of pinyin in her early years, so it is not an essential tool for her, she now only uses it to learn new characters.  But she included pinyin in this writing, why?  Because she handed it to me when she had finished and said ‘Mum, I’ve added pinyin for you because I know there will be some terms you don’t know’.  I agree, I struggle with Minecraft terms in English!  When I read ‘熔岩跑酷’ I asked her what 跑酷 was, to which she replied ‘guess mum’.  Well it literally means ‘run cool’…to which she spurred ‘come on mum, think about it, what does it sound like?’ Well it is pronounced ‘paoku’ or ‘pow koo’ for those not familiar with pinyin!  It took me a while, my daughter was not going to let me off till I had got it…she is a natural teacher!  Then the penny dropped, ‘ah, parkour!’, (you know the sport where people jump over urban walls and buildings etc), it is also a game they set up in Minecraft, just like regular parkour (literally ‘running cool’ in Chinese, how cool of a name is that!!), but of course in Minecraft, they play it over lava…as if Parkour isn’t hard enough as it is!!!  I asked her what she does in a 贸易间 literally, trading room, and she said ‘That’s where we trade with the villagers derrrr’, enough said. Then her explanation of the breakdown of the translations of ‘the Nether portal’ and ‘The End portal’….I mean 下界传送门 is not everyday Chinese….bit she knows 界 means boundary 下 means under, together it’s an underworld of mortals…she can make connections to everyday words and usage with her ‘in the moment fantasy world’, they say true learning only takes place when we are in the moment!

Such a task creates endless possibilities to compare and contrast our languages….I then asked her why she had chosen 去世 which we would translate as ‘pass away’ instead of 死了 which is the more straight forward saying of ‘to die’.  We have chatted about this before, she knows that the former is more polite and ‘softer’, when talking about death to people, but why would she choose it for a game? To which she replied ‘it sounds nicer mum, plus, it’s Minecraft, 我的世界’（Minecraft is literally ‘My world’ in Mandarin), ‘so 去世 is better because it means leave the world’.

I feel like one of those Jedi or Kung Fu masters ready to say to their pupil, ‘Little one, I can teach you no more…’