Middle and Senior students…this is a long post, but steps you through the character learning strategies we are discussing in class….

How will this picture 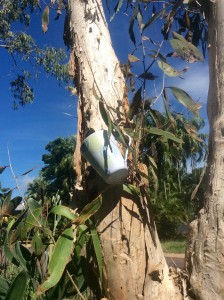 help you remember this Chinese character (click on it)

Now visualize an apprentice lumberjack with an axe about to chop this tree down, with his horrified supervisor saying to him:

‘I said NOT the TREE with the CUP tied to it, the GIANT collects the maple sap from that one to have with his BACON’.

What does this mean?

We have embarked on our journey of learning how to recognize and write by memory thousands of Chinese characters! We have started with a handful, but over the terms the number of characters will grow. If we learn these characters by rote memorization, after about 50 or so characters our brains will either refuse to take in any more, or forget the earlier ones we learned. We need an efficient strategy…

Ever wonder how those people in Vegas count cards??? They make up stories, using characters or objects to represent each number and suit, and visualization techniques to produce the stories quickly…

Well we’re not going to Vegas, but we do have to learn an awful lot of Chinese characters, and we can do this more efficiently using the same technique. But we have to learn how to write the character, the pinyin, the tone, the definition…why on earth would we try to learn a story for each character too????? Surely this would slow down our learning?????

Well maybe at the start. But once we get the hang of it, the stories help our analysis of character component breakdown, we then create stories faster for future characters, and the previous characters are in our long term memories already. We become masters of character learning instead of slaves to rote memorization.

We are already using ‘Skritter’ a spaced repetition tool to help us manage our character learning.  Spaced repetition can help us gain a retention rate of 90%, but only in conjunction with a method of memorization.  I used a method by Alison Matthews in her book ‘Learning Chinese Characters’. Every character is made up by components that usually have a meaning within themselves. This means learning the components, but it is a skill that will increase your Chinese character learning efficiency exponentially!

For example the character 杯, which means ‘cup’ is made up of 2 components, 木 and 不. 木 means ‘wood’ or ‘tree’, and 不 means ‘not’. So if we have a story that has ‘ tree’ ‘not’ and ‘cup’ in it, we can remember that putting these 2 components together makes the character for ‘cup’. But Chinese isn’t as simple as that, we need to remember how to say the character, and in which tone. So we need to add to our story some way to learn these too. This character is pronounced ‘bei’ like the ‘bay’ sound in the word ‘bacon’. It is in first tone ‘bēi’. So if we have bacon in the story somewhere, we can remember it is pronounced ‘bei’, but what about the tone?

So our story (mnemonic or visualization) for the character ‘杯’ can be this:

‘I said NOT the TREE with the CUP tied to it’ cried the horrified lumberjack to his apprentice, ‘The GIANT collects the maple sap from that one to have with his BACON’.

We can use a book like Matthew’s to give us ready made stories, or we can use the shared mnemonics from Chinese learners round the world (just click on mnemonics in your skritter account as you are studying the character), or you can make up you own and share with the Chinese learning community in Skritter yourself.

How do we learn what the components mean?

We will practice this technique and share our ideas in class as we learn more characters. We will start to reflect about this technique regularly in our blogs…the next tool we will be setting up as part of our Mandarin learning journey!

Explain this method to your family, what do they think?  Show them a character that you are learning, find out the meaning of the components, and see if they can help you make up a bizarre story!  The more bizarre and interesting, the more likely it will work!