Kids love acting out this song!

We often sing it in class just using the child’s name eg. Xiao Lucas (Little Lucas), to call each child out to come and help pull the turnip.  But if we have read a story with animals in it, like Brown Bear Brown Bear, I allocate each child an animal from the book in the form of a picture, head band the child has made, or soft toy etc.  So when we sing 小红鸟， 快快来 (little red bird, come quickly), the children have to listen carefully for their animal being called to come and help pull the turnip! In this video version, it is an old lady, young girl, kitten and duck that help!

I also use this song with my transition kids to give them an example of how the syllables work in Chinese.  I tell them the story of how I was in 麦当劳 (McDonalds) in China,  and asked them for a 罗卜派 ( when I meant to ask for a 菠萝派), and then act out the confused look on the server’s face!  We say the word turnip ‘luo bo’ and pineapple ‘bo luo’ and the children quickly pick up that I got the syllables the wrong way round!  So I was actually asking for a turnip pie instead of a pineapple pie!   They find this hilarious and it gives them an example of how the syllables work, and what happens if you say them the wrong way!  It also introduces them to loan words! (pai = pie) and the kids are often curious to what other foods sound the same as English in Chinese! 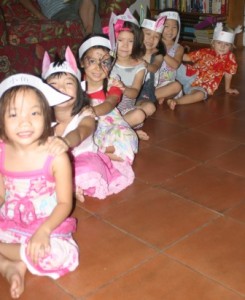 Besides all this, it actually introduces the turnip as a vegetable in English…amazing how many kids have never seen one or heard of one!

Here are the lyrics: